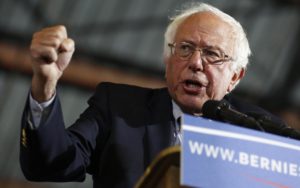 Former presidential candidate, Senator Bernie Sanders along with several other U.S. senators are urging the Treasury Department’s Financial Crimes Enforcement Network (FinCEN) to take action to ensure that vendors and suppliers working with legal marijuana businesses do not have their banking services taken away.

“The majority of legal marijuana businesses, and businesses that provide services to them, are all but barred from participating in the financial system,” the senators wrote in a letter to FinCEN. “As a result, many legal businesses are forced to operate in cash, which jeopardizes community safety.”

“A large number of professionals have been unable to access the financial system because they are doing business with marijuana growers and dispensaries,” said the senators.

This group includes lawyers, security companies, landlords, electricians, plumbers and even chemists and researchers, who might be working with growers and dispensaries.

With medical or recreational weed legal in 28 states and Washington DC, the federal government’s stubborn insistence on keeping cannabis an illegal, Schedule 1 drug has the feds butting heads with well over half the country.

This conflict has resulted in a gray area for the weed industry. It exposes the millions who work in it—or hope to work in it—to an endlessly confusing, inconvenient and, worse yet, dangerous legal situation.

“This business environment is an invitation to tax fraud, robberies, money laundering and organized crime,” the lawmakers wrote in their letter.

Some of these legit, indirect business people have had their bank accounts frozen, have been unable to open checking accounts and accept credit cards or checks, the senators say. In some cases, they have also lost access to existing accounts, such as retirement accounts, and have been forced to pay their employees, taxes and bills in cash.

One wonders what it will take for the federal government to get out of our, and its own, way and allow everyone to reap the benefits of a harmless, medically valuable and much beloved plant?

Idris Elba picks his perfect song for specific situations, and they're good picks