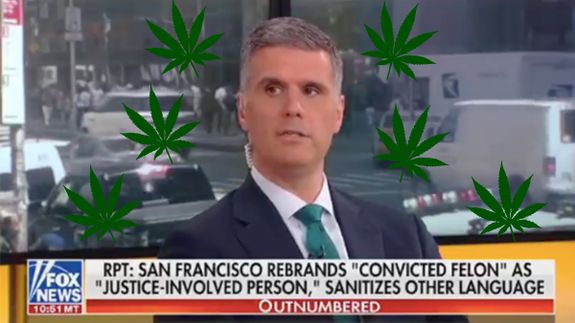 A Fox News guest said that San Francisco should be focused on solving its homelessness crisis instead of trying to improve the language used in its justice system — specifically, they should focus on those on the streets who “just shot up marijuana.”

San Francisco’s Board of Supervisors adopted new “person first” guidelines to refer to people with criminal records. Instead of calling someone a convicted felon, for example, the city would refer to them as a “formerly incarcerated person” or a “justice-involved” person, the San Francisco Chronicle reports. Repeat offenders would be called “returning residents.” Minors will be referred to as “young person with justice system involvement” or “young person impacted by the juvenile justice system” instead of juvenile delinquents, and drug addicts will be called people “with a history of substance use.”  Read more…

Here's how to introduce the boomer in your life to weed

What to know before buying your mom CBD for the holidays

Here's how to introduce the boomer in your life to weed

What to know before buying your mom CBD for the holidays

11 gifts for the weed lover in your life

This is the most annoying bong ever made