UPDATE: Nov. 27, 2021, 6:25 p.m. EST This post has been updated to reflect current prices and add new deals on the Outsize+ vacuum, plus some purifier deals.

We’ve gathered up the best Cyber Monday deals on Dyson vacuums as of Nov. 27. Check them out below.

Robot vacuums are often in the spotlight for Black Friday and Cyber Monday. Their automated convenience is undeniably sweet, but for some, a Roomba just can’t compare to the rush of manual vacuuming. That’s where Dyson comes in.

If you have your eye on a Dyson, Cyber Monday 2021 is a damn good time to shop for one, especially if you plan to cut the cord. Nearly every Black Friday deal is sticking around as long as the stock can keep up.

Dyson cordless stick vacuums are the star of the show, and Best Buy is the place to save on the high-end Dyson Outsize. Target and Walmart were battling as the spot to pick up a V8 model for under $300, though Target’s $249.99 sold out and Walmart randomly takes the V8 Fluffy’s deal away every other day or so. (What is the reason?) We’re hoping at least one retailer will bring a super affordable model back for Cyber Monday.

Yes, you can absolutely still shop Black Friday deals and these ones are the best

Dyson’s website is also getting in on the action. It introduced a deal on the V10 Animal (a cordless model rarely in the spotlight) which Best Buy has replicated and added to its stellar list of Outsize models on sale (and somehow still in stock). The Dyson website is also the spot to shop for Dyson hair products: Score special editions of the Dyson Airwrap, Supersonic, and Corrale (plus extra gifts), or snag a refurbished Airwrap set for $100 off. The deals are so hot that Dyson enacted a virtual queue to even browse the website.

We’re tracking the best Black Friday Dyson deals below. If you’ve decided against doing your vacuuming yourself, we also have this pretty big list of Cyber Monday robot vacuum deals.

All newly added deals have been marked with a ✨. Anything with a strikeout was either sold out or no longer available at the sale price as of this writing, but check back often — we’re updating this page constantly. 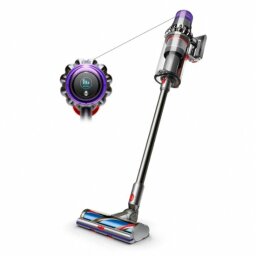 The Dyson Outsize series is unofficially the V11, if we’re regarding it as the next-best Dyson after the V10. Dyson’s bulkiest, most powerful stick vacuum shells out 220 Air Watts of suction power, 120 minutes of power, and holds half a gallon worth of debris.

What are the different types of Dyson vacuums?

Perhaps harder than tracking down the Dysons on sale for Black Friday and Cyber Monday is confirming which models are even still in circulation. This determines which discounts are actually legit and which prices have been slashed for the past year because the vacuum is an old model.

You’re probably shopping for a Dyson cordless vacuum. The cordless stick vacuums are Dyson’s most expansive range, offering base stick vacuums around the $250 to $300 price point and leveling up to powerhouses around the $700 to $850 price point. The V8 and Outsize models are the most likely to see groundbreaking Black Friday sales. For more help, check out our comparison guide to Dyson’s current stick, ball, canister, and handheld vacs.