“Hope and grit keeps you out of the you know what.” This is the unofficial motto of the Belcher family, whose misadventures and resilience have kept audiences tuned in for 12 seasons of Bob’s Burgers and counting. Now, with The Bob’s Burgers Movie, they and their cavalcade of quirky neighbors go big on the big screen with an adventure that involves a major threat to the restaurant and a mystery that sets the intrepid kids on a dangerous quest for the truth. And of course, along the way, there will be musical numbers, sung not well but wonderfully nonetheless.

If you’ve been keeping an eye on Bob’s Burgers storefront over the course of Season 12, you’ll have spotted the crack growing on the sidewalk outside. In The Bob’s Burgers Movie, the crack crumbles into a massive sinkhole that makes it impossible to get into the restaurant, well, unless you go down the “scenic alley” that even optimist Linda (John Roberts) admits smells like pee.

The timing couldn’t be worse, as Bob (H. Jon Benjamin) has a bank loan looming and only seven days to pay it off before their family burger joint is shuttered. Maybe they could ask their wealthy and wildly eccentric landlord, Calvin Fischoeder (Kevin Kline) for help? Well, he’s got troubles of his own once something macabre is unearthed from that hole.

While Bob and Linda team up with their pestering bestie Teddy (Larry Murphy) to save the restaurant through bold and bikini-clad promotions, Louise (Kristen Schaal) leads her siblings, Gene (Eugene Mirman) and Tina (Dan Mintz), on a mission to save the day through other, more outrageous means.

This pitches the animated clan into the musty whimsy of Wonder Wharf, the crusty charms of Carnieapolis, and radical fantasies involving music-hating robots, romantic horse rides, and ruthless comeuppances. Just another day for the Belchers, really, but this time it’s cinematic!

From the first trailers, fans got a taste of what co-creator Loren Bouchard and his co-director Bernard Derriman were bringing to the beloved TV show’s movie spinoff. Chiefly, shadows.

While much of the series is evenly “lit” and thereby pretty flat in appearance, the Belchers’ home and restaurant are now draped in shadows.

This brings a welcomed sense of dimension that plays well on a theater screen. Beyond that, it brews an atmosphere of desperation as Bob groans over the seeming doom of his dream and the dark path that his kids are tumbling down.

Flashier though are the musical numbers, which is nothing new to the series, as characters are prone to bounce into songs sincere and absurd. But now, they’ve got a bigger budget to really build up the cast and choreography. 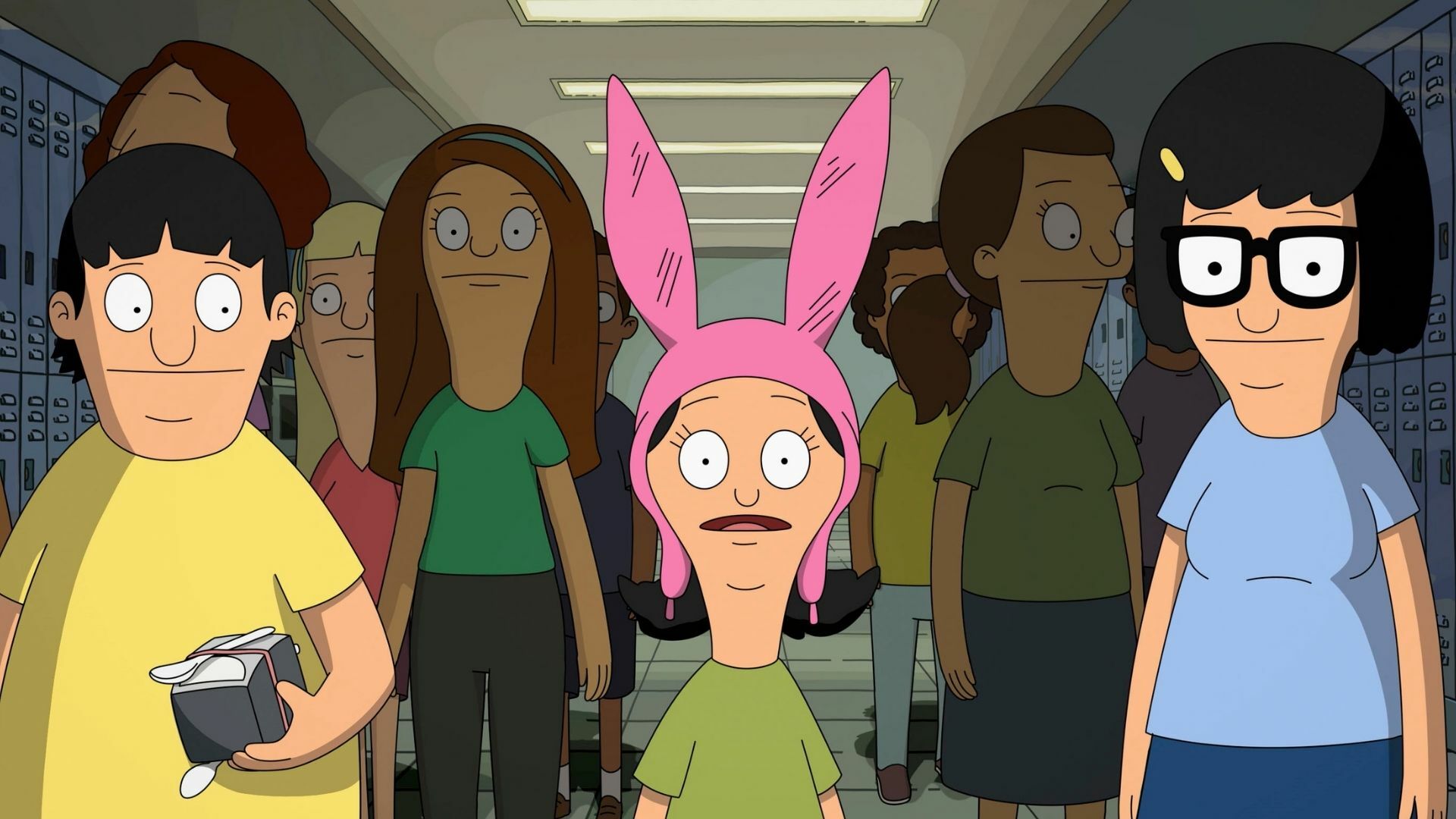 Part of the unique pleasure of the songs featured in Bob’s Burgers is that they aren’t exactly good. None of the Belchers have much of a singing voice, even the music-obsessed Gene. But every song on the show embraced these quirks, leaning into the passion of the performance, turning a ballad about being stuck on the toilet into a soaring song of triumph, despite its flat and squawking duet.

In the movie, there are songs about morning routines, summer aspirations, and — of course — class inequity that rankle at the core of Seymour’s Bay. Bouchard grows his cast of characters to a rousing troupe of carnies, who exuberantly dance while griping in a jam called “Lucky Ducks.” But all the Belchers get a bit of an upgrade in their movement, thanks to animation that uses every frame to express. 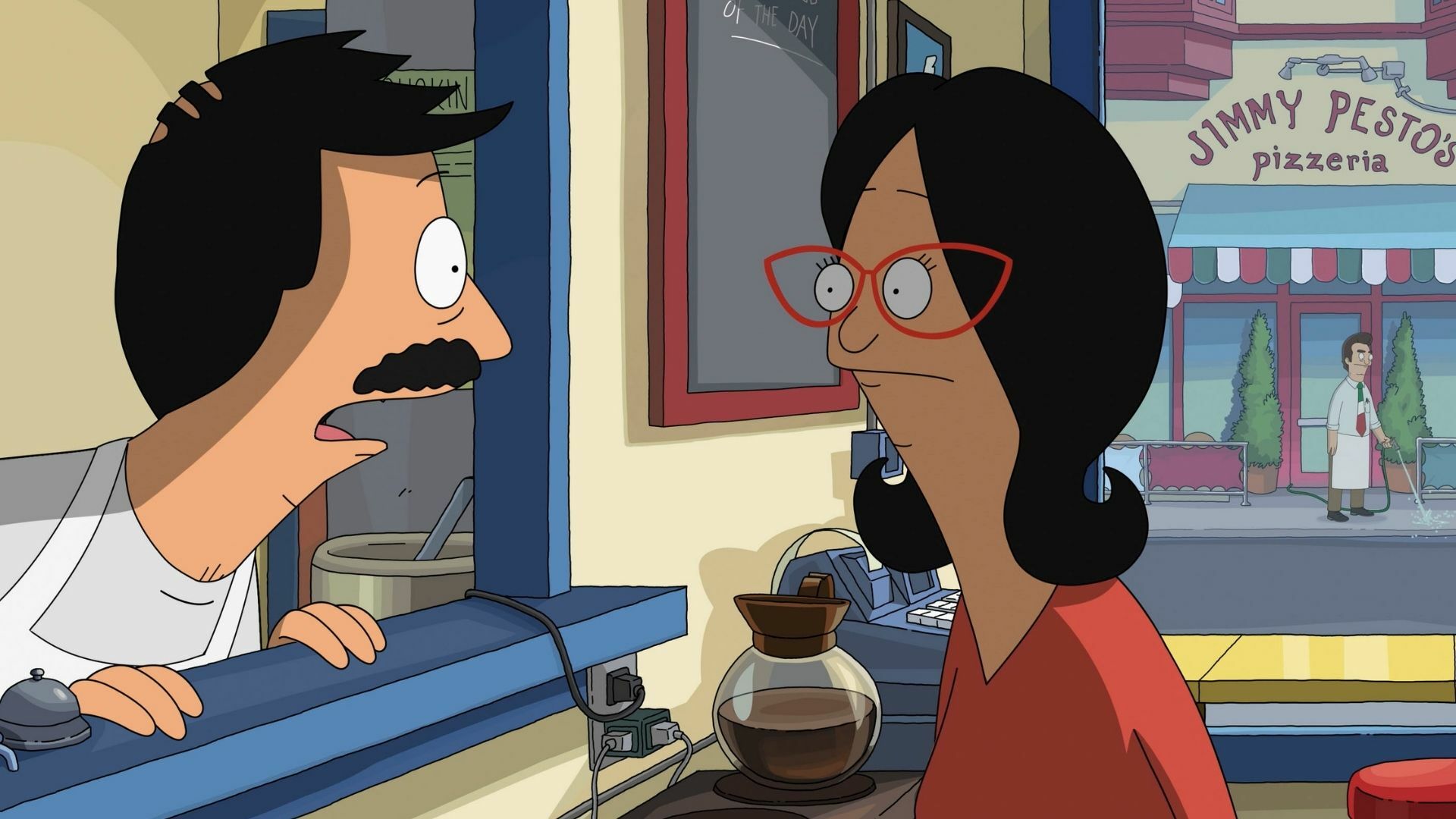 While Bouchard assures that even newbies to Bob’s Burgers can enjoy the movie, there are plenty of established arcs baked into its tasty recipe.

Of course, money troubles are nothing new for Bob and Linda, nor is Teddy’s overeagerness to help (and awkwardly wedge his way into the family). Louise being hard-headed but big-hearted is a familiar beat, as is Gene dreaming up a unique vision of rock stardom and Tina chasing after that shallow cad, Jimmy Jr.

Also popping up into the plot are a slew of beloved supporting players, including (but not limited to) Mr. Frond (David Herman), Regular-Sized Rudy (Brian Huskey), Sergeant Bosco (Gary Cole), Chloe Barbash (Stephanie Beatriz), and bank robber-turned-carnie Mickey. But long-time fans will thrill over two big reveals that have long been quietly brewing curiosities on the show, including the origins of Louise’s signature bunny ears hat.

The Bob’s Burgers Movie is wobbly but wonderful 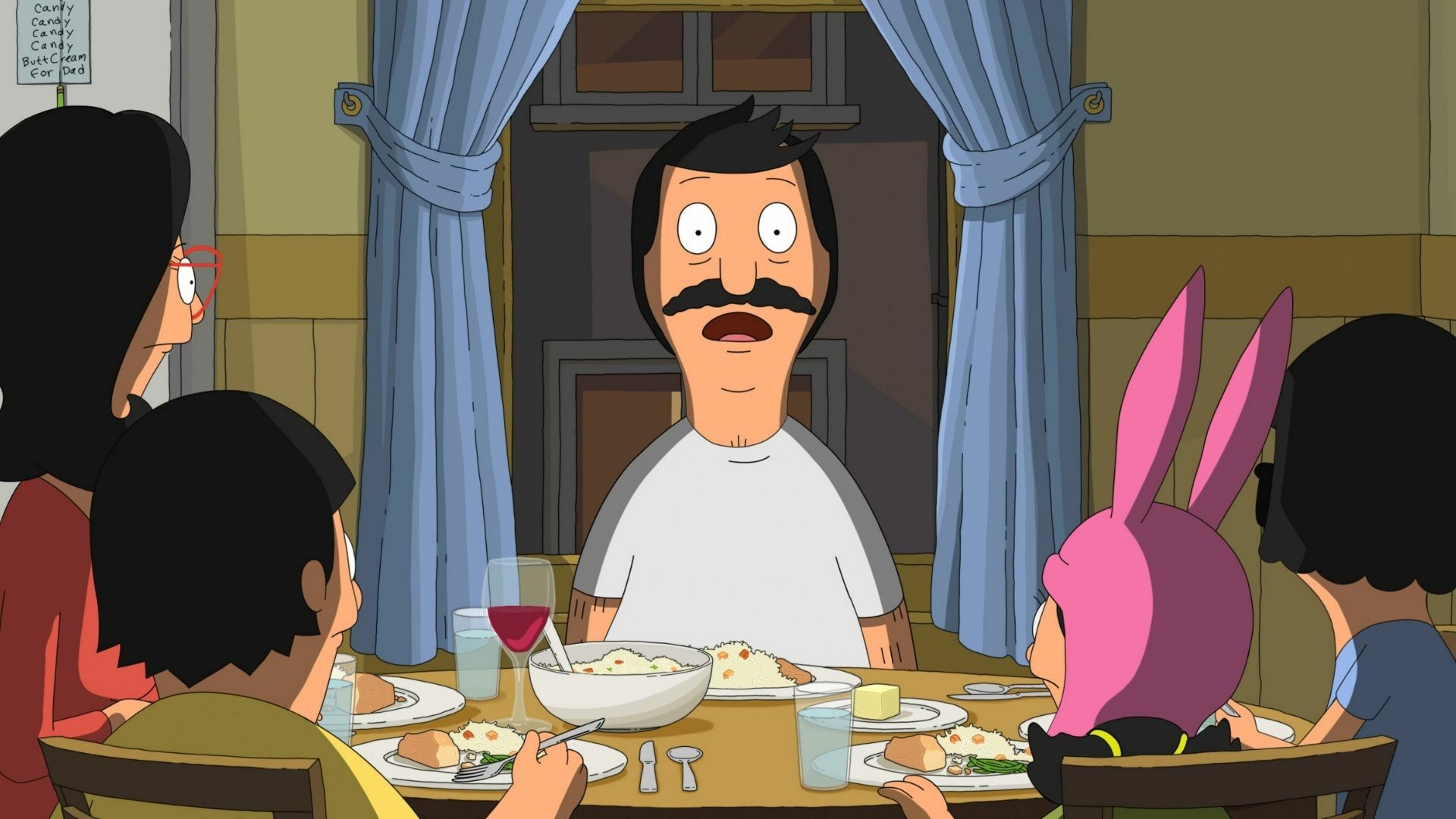 Bouchard and his troupe bring plenty of moxie to this movie. The animation crackles with the enhanced expression. The voice cast is reliably lively, whether muttering in dread or bursting into song.

But The Bob’s Burgers Movie falls prey to Sitcom Syndrome, in that no matter how high the stakes get, no matter how low the lows sink, it still has to end more or less where it started so that Season 13 can pick up without issue. This keeps Bouchard and his fellow screenwriters, Jim Dauterive and Nora Smith, from doing anything truly daring with the plot.

When it’s clear someone will have to pay a terrible price for what’s uncovered in that sinkhole, we might be able to enjoy the bumper car ride, full of jolts and fun. But we also know we won’t really go anywhere new. You don’t want to lose a major character when the show is still going strong. This makes a particular climactic song number feel more overdone and — well, not dry, but certainly underwhelming.

Despite my quibble with its third act, this long-time fan of Bob’s Burgers and Bouchard (seek out Home Movies) found an unexpected joy in seeing The Bob’s Burgers Movie in theaters: watching it with other deep-cut fans.

For over a decade, this is a show I’ve turned to over and over for laughs, comfort, and catharsis, but in my own home. So, when I could hear others in the theater chortling over Gene’s goofy one-liners or chirping in recognition of a callback or gasping over a shocking reveal, it was exhilarating, in part because it was a reminder of what a fervent fan following this family has and how I am one of many.

There was a jolt of joy every time we laughed together, sharing in our appreciation for an adult animation series that is unapologetically goofy and heartfelt — and occasionally gross!

In the end, The Bob’s Burgers Movie is a celebration of not just its characters, but of the fans whose devotion has brought them to theaters.

The Bob’s Burgers Movie opens in theaters May 27. 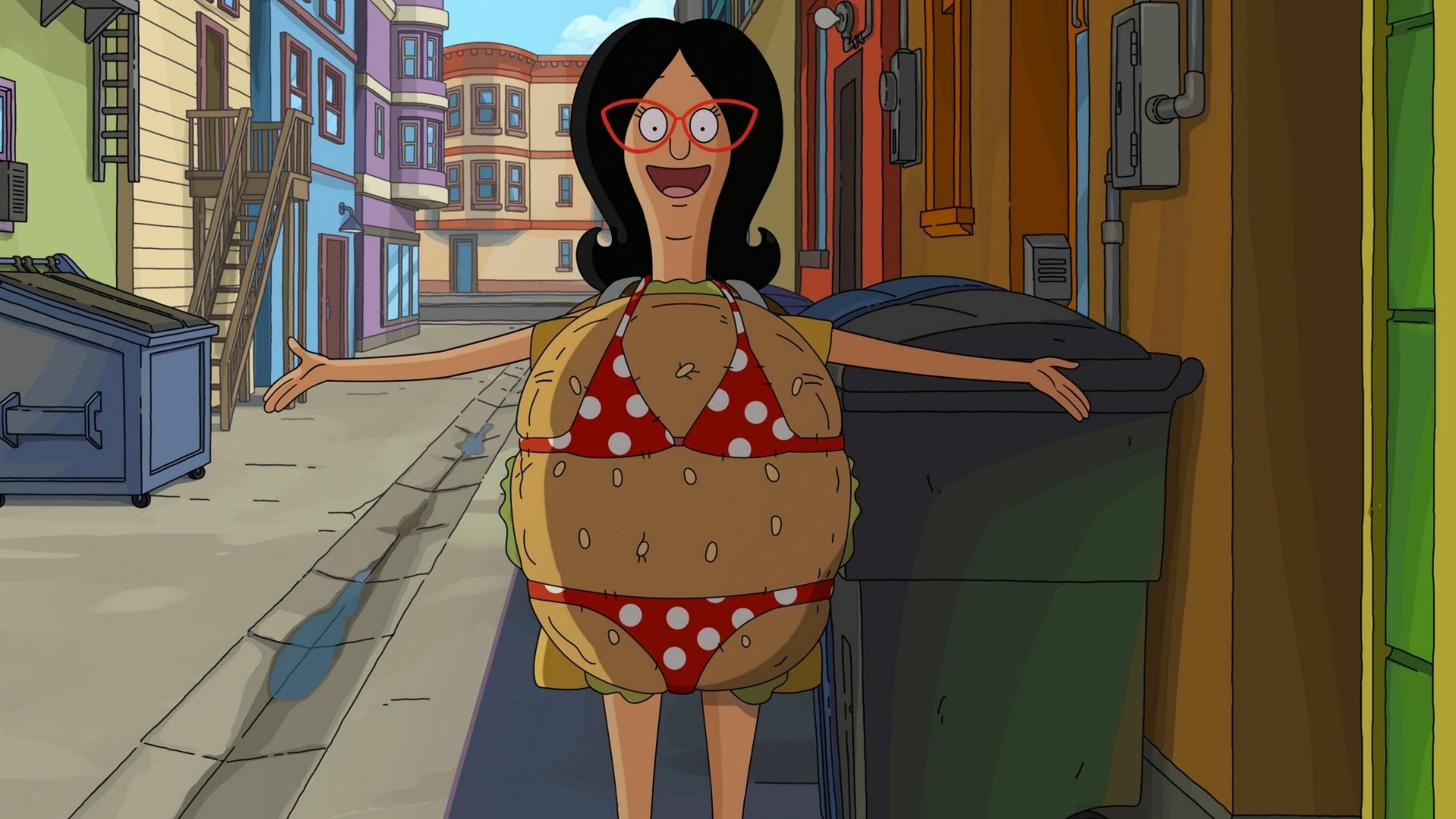